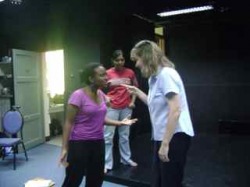 What is the definition of theatre?  How can it change lives?  At Beijing BISS International School, we set out to challenge and change perceptions about traditional expectations for theatre.  The unwitting audience demonstrated their surprise.

How did we accomplish this? Boal and Invisible Theatre was the starting point for my Grade Eleven Theatre Arts class’s exploration of issue of the student dress code, by creating a dynamic and exciting piece of theatre, which challenged not only my students, but others’ expectations and perceptions of what Theatre is supposed to be.

The students brainstormed and created a script around the issues of appropriate dress code, with the final message being that breaking the rules was not the correct action, instead pupils should use the student council as a vehicle for that change.  There was lots of excitement and enthusiasm about the creation of “The incident”. The “incident” was performed in the school Annex at lunchtime.  Each student was given a role within different student groups. One “show-stopping” moment was when there was complete silence in the Annex, except for two voices. A teacher and a student in a heated verbal discussion about the dress code.  The “performance” continued after this situation as other non-theatre arts students became “spec-actors”(spectators who become actors in the scene) by discussing and attempting the negotiation of the incident toward a social / school rule change. This echoed into the hallways and emails of the next couple of days. The buzz it created was beyond what we all expected. It was powerful theatrical experience where the rules and the concept of what Theatre is were definitely challenged.